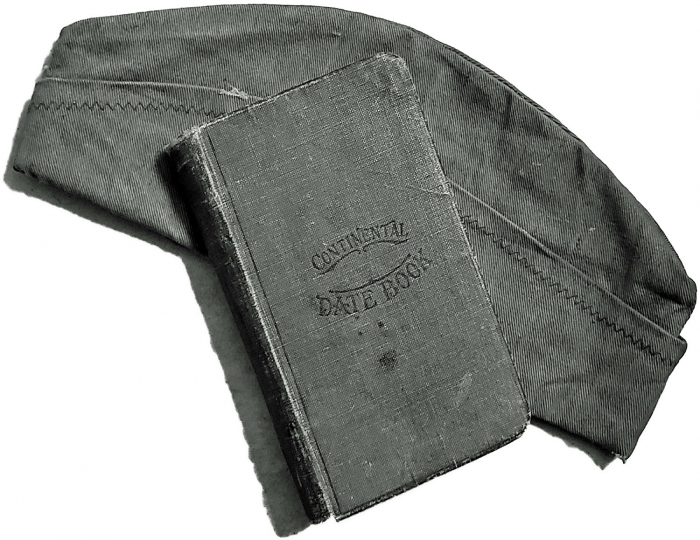 Judy Bruckner’s lifelong passion for family history began at a young age. An interest sparked by a multi-generational collection of stories, photographs and countless afternoons beside the beloved grandmother whom cared for it all. Every Tintype, Daguerreotype and Cartes des Visites was a window peering into the past, every enthralling story a chance for Judy to reach through time and touch the fabric of her family's history.

Most prized amongst this collection of treasure; a black, leather-bound album containing photographs, and a one-year diary by a 19-year old ambulance driver named Charles C. Leonard, Judy's grandfather. This vast collection of memories allowed her to experience WW1 through Charles' eyes during his time as a volunteer for the American Field Service organization, which was taken over by the US Army shortly after he arrived in July, 1917. Charles served as an ambulance driver until May 1919.

Judy knew the unique experiences Charles collected during the final years of the Great War needed to be shared with the world so upon inheriting the prized album, she went to work. Between a career and motherhood, she spent the next 7 years digitally repairing the 1000+ fading photos, transcribing journal entries, and exhaustively researching broader events of the war to support the magnificent memories Charles preserved. This book is the achievement of Judy and her grandfather’s work.

The time spent unlocking the mysteries of her grandfather’s experiences broadened her appreciation about a war that before she had only a slight knowledge about from school. Her research brought her closer to the men who served along side Charles as she translated stories preserved from French books from 1922 and from old newsletters and documents preserved by the AFS Virtual Museum.

When asked about her experience, Judy comments:

Writing a book was much more challenging and rewarding than I ever imagined. I became absorbed in learning as much as I could about USAAS 644 (old SSU 32) and the French infantry division 37 ( DI 37 ). I translated French books about DI 37 into English to read diaries and to track their journey as they chased the enemy back to Germany. It was hard to leave some of their touching stories out, but I wanted to focus on Charles and his experiences. The commitment and bravery of these Algerian fighters and their French Officers helped me to understand the sacrifice of all who serve.

As I learned about Section 71 and 32, I decided to create a pictorial roster of these men. This would help confirm some of the photos of people taken by Charles but left unlabeled. My challenge was finding a military roster. In 1973 the National Archives in St. Louis, Missouri had a fire in the Military Personnel Record Center in which most WWI service records were stored. All information about USAAS 644 was lost in that fire. Through research using the documents I possessed and online sites I was able to find most of the men.

With the help of a genealogy internet site, I reached out to the veteran’s family members. I was surprised how many folks knew little of their relative’s service and had no photos to share of that person of just 100 years ago. It was here I asked for the AFS Virtual Museum assistance. What AFS was unable to provide I used passport photos from the National Archives. The family histories, especially old photos gave me a greater appreciation to the value of the collection my grandparents preserved for future generations to experience.

I started this project with the intent to make copies for my immediate family. I quickly realized the uniqueness and importance of this collection especially with how little personal histories of that time remain. When my grandfather wrote in his daily diary or snapped a photo, I doubt he imagined future generations would enjoy it. It honors Charles and all who served along side him to make the book available to the public.

This project saves and corrects some historical errors, because personal accounts hold more value to the researcher. The photo album and diary tell a different side of the Great War. The recorded “brushes with death” Charles wrote about made me feel lucky to be here to share this information today.

Memories of a WWI Ambulance Driver is a pictorial and written account of WW1. It is not a typical book. It is a thoughtful account of one mans’ experience as he served the French forces and the United States Army.

Not only an enthusiast of family history, Judy is a seasoned genealogist with experience teaching introductory classes on genealogy research.
Additionally, this book is not the first time Judy has shared her family's history with the world. She also published a short story by her beloved grandmother in the PBS companion book “In Search of Our Ancestors”, by Megan Smolenyak. Now retired, she is dedicated to spending the rest of her life sharing the stories of the more than 20,000 family photos, letters and other memories preserved by her ancestors.

More in this category: « The American Field Service Fellowships for French Universities