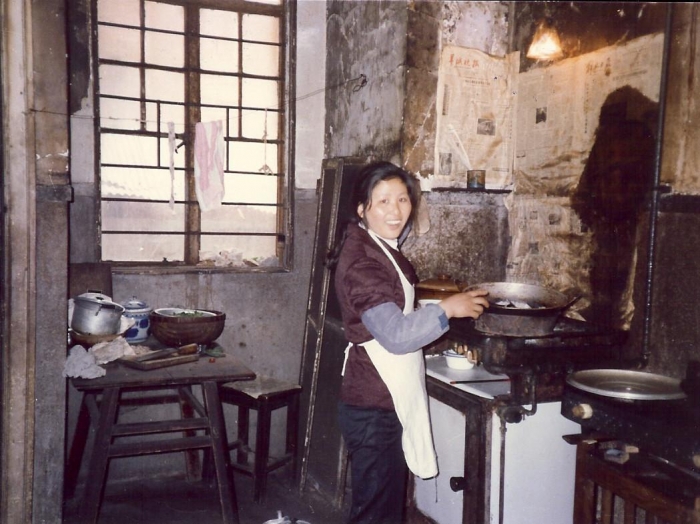 The Chinese cuisine we ate everyday was not what we expected. China was a poor country then, everything was basic and that included food. Pork was rationed and so was oil; and yet, they used rather too much of it to my taste. Refrigerated transport was not developed and that meant eating locally grown products. In Beijing, where the winter is long and extremely cold, there wasn't much variety for a few months and our diet mostly consisted of Chinese cabbage (baicai), rice, eggs, tomatoes and pork or chicken. There was the odd spoon available at times but we soon learned the art of eating with chopsticks. Within a few weeks, most of us could pick up peanuts without too much trouble. At the college canteen, they gave us a wooden pair wrapped in paper at each meal, a favour for foreign guests. However, in many restaurants, they were reusable and customers grabbed a pair from a big pot in the middle of the table. "You can't do that" scorned Teacher Hu, once, during lunch at a dumpling house. She had just come back from Australia where she studied for a while and felt hygiene was non-existent in China. "It won't kill me" I laughed. In defiance, I picked up a dumpling and gulped it down.
The one meal I found difficult to eat was breakfast as stir fried rice or noodles with weak tea didn't appeal to me early in the morning. For my breakfast, I slipped into "bourgeois decadence" and bought instant coffee at the Friendship Store which carried imported products exclusively for foreigners. The one in Beijing was located at the other end of town, about an hour away by transport. It was the only place in the capital, besides a few hotels, where you could find the basic type of Nescafé. Around the corner from our college, oddly enough, I could buy "Croissants". This was a welcome find even if they didn't taste like the real thing. I found them in a tiny store behind our campus and, surprised, asked the shopkeeper "What are they in Chinese?" "Beef Horn Breads" I worked out. The shopkeeper carried on with great confidence. "Deng Xiaoping lived in France when he was a young man, and liked them a lot."Apparently, Deng never failed to place an order whenever a government official made a trip to Paris.
In those days, fruit was a rare commodity. You could buy it but at exorbitant prices even after some bargaining. The Chinese government had recently allowed farmers to come to the cities and sell their own products freely but they charged disproportionate prices. Food markets were not the colourful places often found in poor countries but a depressing sight revealing that food was still scarce. One day at the market, I saw a woman hold a piece of meat with two fingers making her way home to cook her dinner. Even wrapping paper was a rare commodity in China.

More in this category: « Keeping Warm We Are Your Loyal Red Guards »